Biseagal started out small, and since opening our doors in 2002, we’ve witnessed many changes come to our neighbourhood and to the city–and of course, we’ve changed too.  But our values are still the same: quality work, fair prices, and a love of bikes.

If there’s one thing we’ve learned, though, it’s that  ten plus years don’t just go by without some pretty entertaining stories. 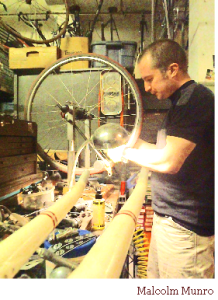 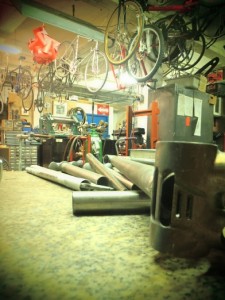 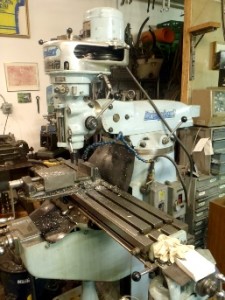 I started fixing bikes in my kitchen. I was [bicycle] racing, and in my spare time I’d do tune-ups for people out of my house. But I could only work on one or two bikes at a time.  So I needed a space.

Biseagal was born out of necessity–and maybe, the desire for a less crowded kitchen. Experienced mechanics and bike-lovers, Malcolm and his wife began by renting space in a unit at 388 Carlaw Ave., the same building he is in today.  It is one of only a few remaining industrial buildings in Toronto’s downtown, and boasts an incredibly diverse tenancy, including welders and machinists, dog trainers, rock-climbers, and sushi chefs.

One of my first regular customers was Darren, of Bedford Unicycles. I’d build wheels for him; sometimes he’d drop off ten or twenty wheels at once. Early on, I made an important decision: I decided I would say ‘yes’ to any job, and see where it got me.

This philosophy means that Biseagal sees more than its fair share of strange repairs–such as seized seatposts, damaged dropouts, and top tubes pleated in half.  Malcolm has fixed motorcycles, Winebagos, chariots, and tricycles; eighteen-speed gearboxes; and a Swiss bike-car that seats a family of five.

The idea of accepting any job that came his way also led Malcolm to begin building his own bicycle frames. Malcolm explains: a friend of his wanted a racing bike for his young daughter, but they were unable to find one in her size.  Not to be deterred, they decided to make her a bike from scratch.

They didn’t have any industrial welding equipment–so, after measuring and cutting the tubing for the bike’s frame, they improvised with a portable butane torch from Canadian Tire. The project took them a month.

In the last decade-plus since then, Malcolm has become an expert at framebuilding, creating high-quality bicycle frames with incredible attention to craftsmanship and geometry. He says he remembers every frame he’s ever made.

A Machine Shop is Born

In 2003, Biseagal teamed up with  a machinist who wanted to open a business, and so the quest began to acquire all the additional tools that a small machine-shop would need.

We looked in the paper, and found some place in Stoney Creek that had a Bridgeport [milling machine] for sale. I didn’t know what it was. I’d heard the name.  It was the first milling machine I’d seen in my entire life. I had a feeling… I just thought, ‘We should buy this.’

So we bought the machine, and they threw in a huge granite tabletop for free.  They delivered the machine and the table to the loading dock in the building, but [my friend] Scotty and I had to move them the rest of the way, into the store.  We discovered pretty quickly that the Bridgeport was 2400 lbs. and the granite table was 1500 lbs.

We didn’t know how to move them! It took us ten hours – me, Scotty, and people from the rest of the building coming by now and again to help. But we finally did it.

Biseagal has recently relocated to a new unit in the same building, so naturally, the topic of moving these big machines comes up.  Malcolm shrugs; the milling machine only takes about twenty minutes to move now, he says.

There’s something to be said for experience.

The Rest is History?

Biseagal still has almost all of the machine-shop equipment in the new unit, and, despite the labyrinthine nature of the building, the shop’s customers are finding their way there as well.  The goal of the move, says Malcolm, is to make sure that the space he is in suits his business model; the variety and complexity of  his work mean that Malcolm is most comfortable when doing all of his jobs himself. While in the past, he has hired employees, essentially Biseagal is run as a one-man operation. This means that the shop is busy, but the consensus among his customers seems to be: if you want it done right, come here.

Indeed, over the course of this interview, a steady stream of them have appeared at the door: commuters, ranging in age from  15 to 70, arriving on all kinds of bikes; couriers with massive bags–or university students hoping to look like couriers (it’s hard to tell which); even another metalworker from a nearby building, who is having some custom parts made here for his own operation.  Malcolm stays open later towards the end of the week to prepare for the weekend rush, and the cross-section of customers who find their way here during those busy times is in itself  a subject of interest. It is difficult to sum up the atmosphere–busy, at times chaotic, but also full of innovative energy. There are parts and projects in every corner, not to mention repairs which would in most shops be deemed unsalvageable.

I ask if there is anything Malcolm wants me to mention in closing, but we are interrupted when the phone rings.  “I guess just – I don’t know. I’m not naturally a ‘businessman.’ I like bikes, and I like fixing them. My business is built around that. I work hard, and I’m proud of what I do.”

My bike gets a glance.

“Also…you need to clean your chain.”